You Are Here:HomeNewsNewsJ&K Fresh NewsGeorge Sibley Emerges from Retirement

Five years after retirement, George Sibley is back in business. 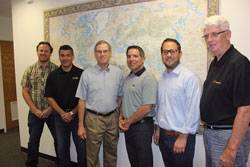 Popular, highly respected and honored by the trade, the soft-spoken Sibley is working on a part-time basis at J&K Fresh East, which is a division of 721 Logistics.

“George is onboard for however many hours he wants to work in a week. He is providing insight into things the industry is trying to understand,” said Larry Antonucci, the company president. “George has the time to spend with his family,” which was his prerequisite before joining J&K, which is located near the Philadelphia International Airport.

In the office of J&K Fresh East are the sales and management staff of Evan Moss, John Antonucci, George Sibley, Larry Antonucci, John Ercolani and Bill Fagan.Antonucci said that the longtime leader of Philadelphia’s international trade community has a better understanding of new federal regulations than most in the business. This includes helping customers comply with challenges like the Food Safety Modernization Act and ACE, which is an automated system that U.S. Customs & Border Control uses to facilitate the electronic importing and exporting of goods.

“I am excited to be back,” said Sibley. “It is a great family company. I worked with most of these guys before” at OHL International, which is also a Philadelphia customs house, “so I am comfortable here. It is an honor to be back.”

He enjoyed his retirement and having had all of his time to enjoy his family, “but I really missed working with the people here and it feels good to have a chance to re-engage,” Sibley said.

In his retirement, Sibley always read trade publications and stayed atop of changes in the trade he knows so well.

John Ercolani, who is J&K’s operations manager, said the firm is “one of the few, if not the only, customs brokers to perform government pilot tests (of new electronic initiatives) with different agencies while they were still in implementation.” J&K has worked with USDA Agriculture Marketing Service, USDA APHIS’ Plant Protection & Quarantine and the Food & Drug Administration on such paperless projects. “We have actively worked with them, giving input on the programs” that are streamlining international trade in complex times.